How to Use Nextdoor to Keep Your Community Safe 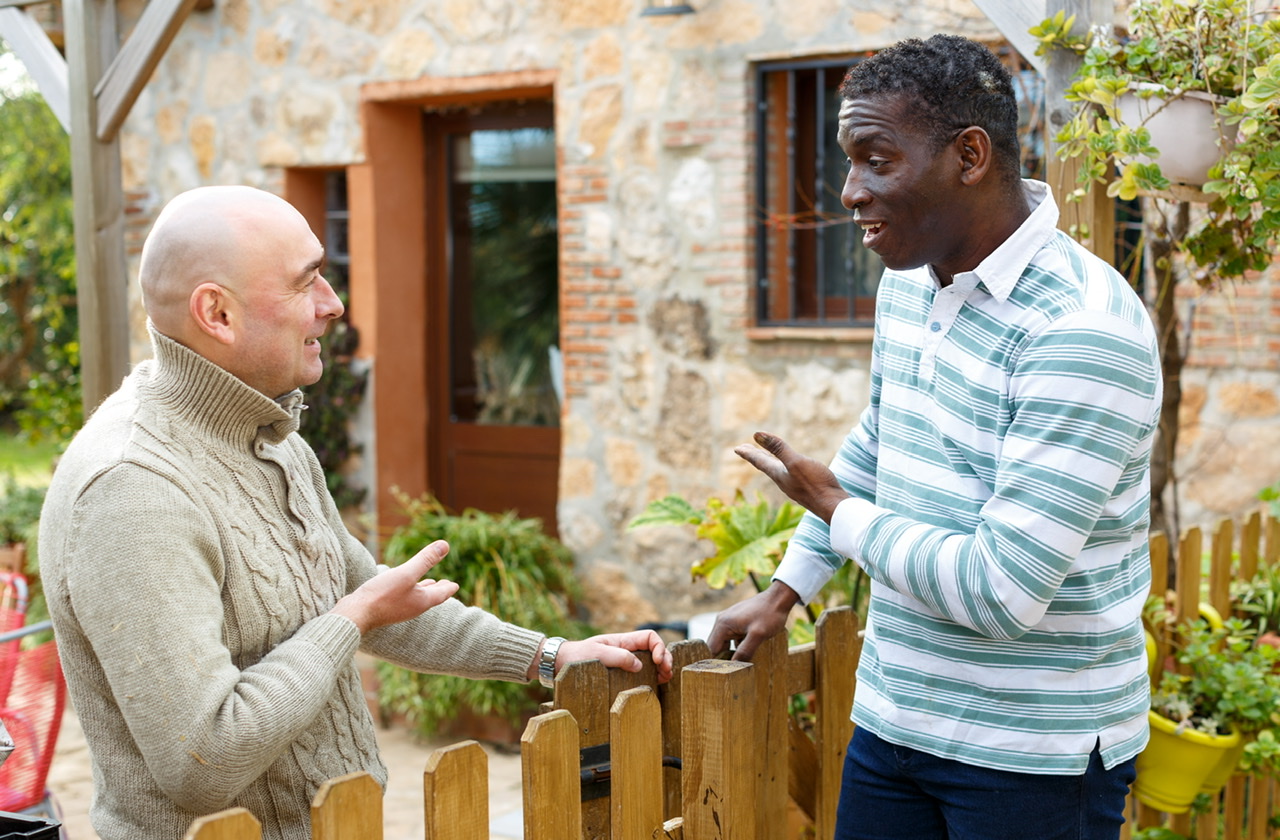 Do you know your neighbours? According to a study reported in the Independent, 73% of Britons don’t know the names of the people living next door.

Because neighbours are more likely to be strangers than friends, the founders of the app Nextdoor, had the idea to bring local people together using Social Media.

Nextdoor is different from other social networks because the goal is to make connections with people who live nearby. In an age where people feel more comfortable communicating digitally, Next-door is a way of reaching out to your neighbours and forming communities.

Today, Nextdoor is used around the world to connect people who live close to one another. People use the platform to lend or borrow items, make recommendations about local businesses or tradesmen, sell things and arrange community social gatherings.

Here are some tips for using Nextdoor to fight crime in your neighbourhood.

You’ll also find us on Nextdoor, offering advice about home security services, including helpful tips and tricks for keeping your property and family safe.

Are your neighbours on Nextdoor? Why not find out?

This site uses Akismet to reduce spam. Learn how your comment data is processed.

What our customers say!

I have been asked to do a review from November 2021 which I am happy to do. Initially, I had contacted someone else and they visited, gave me a price, left, and I never heard from them again. I then contacted Security Masters Ltd and from my first phone call to them, to job completion, the process was very speedy and dealt with pleasantly. I would totally recommend Mark to do a great job.read more

carmel hopkins
16:10 11 Jul 22
Very please with this company, they managed to source my rare door mechanism and fit it perfectly. Very good company

Dean
11:23 07 Jul 22
We couldn't fault the service. We asked for some work to be done and it was done smoothly, efficiently and very cost effectively.

Richard Latteman
14:44 01 Jul 22
OMG Mark is a LEGEND! I had the worse night and Security Masters Limited have come today...explained everything. Fair and honest service. I have so much respect for this company. THANK YOU!read more

Crocus Moon
12:49 17 Jun 22
Excellent service and communication. Mark was very friendly and polite and responded to queries promptly. Arrived on the day and on time as promised and installed a new lock and intercom system. Quality of work was excellent and at a very reasonable price too. Would definitely recommend.read more

Grant Beeming
09:18 04 Feb 22
Very professional service. Mark was able to repair a lock I expected to have to replace. Thank you!

John Grobstein
08:36 01 Feb 22
We called Mark @Security-Masters to what we initially thought was a broken lock. Turned out much more complicated and time consuming. His advice was invaluable and helped us resolve the situation peacefully. Having waited around while the police negotiated, once inside, they worked quickly to change the locks and secure the premises. A huge thank you from all of us.read more

Stephen O'Connor
09:10 30 Jan 22
Really happy with the work. Mark is very professional and went above and beyond, advising across all aspects of security and making sure everything was as easy as possible. Definitely recommend.read more

Gareth Caple
21:17 18 Nov 21
I had a problem with my door not closing properly without a key or extreme force. Mark quoted and then arranged for replacement parts and called me as promised to arrange the repair work. On repair day, he was very quick and efficient. Thank you very much and for accommodating my schedule!read more

Alan Campbell
15:53 09 Nov 21
Mark replaced our front door locks (after a move) quickly and without fuss. I am very happy with the results.

Bruno Fourcroy
08:01 21 Sep 21
Really impressive. Created a solution for my external security gate and intercom system when no other company could. Very satisfied. Would use again.

S Polti
12:06 19 Aug 21
Mark replaced a front door lock and shifted the position of another lock on the door. All done quickly and without fuss. I would use Security Masters again.read more

Rupert Steele
14:29 02 Jul 21
Excellent service from Mark at Security Masters. He replaced a faulty deadlock and sashlock on our backdoor, with the locks keyed alike. It was a quality job - the door closes and locks much better than it ever has!read more

George Costacovich
09:29 25 Jun 21
Mark did an excellent job, would highly recommend him. We had a complicated lock installation required and he had no problem dealing with it.

Ted Walks
07:03 25 Jun 21
super professionalism and care. we had a locksmith come over the night before who just said "he couldn't fix it" whilst these chaps took their time to get the right solution and complete a really good job!!!read more

LUXME NADARAJAH
18:16 26 Oct 20
We can't recommend Mark and David enough. They provided a professional and efficient service from start to finish. Extremely happy. Thank you again!

Marie Burke
13:53 01 Aug 20
I had a job involving a door that needed specific fire regulation knowledge and I couldn’t even find anyone to quote for it. After tearing my hair out for weeks, I found Mark at Security Masters. Mark understood exactly how to do the job correctly to fire regs and proceeded to order the required doorset and complete the job. He was always responsive and always arrived exactly on time. He was thorough, professional and knowledgeable. I’m extremely happy that I found Mark, and couldn’t be more grateful.read more

Philippa Goffe
23:29 27 Nov 19
Really pleased with the prompt, polite and efficient call-out to re-set a lock - particularly after having been let down by a major national chain who sought to reschedule after a two-hour wait!read more

Jo Linnane
11:56 12 Sep 19
Mark and David from Security Masters arrived on time, they were very efficient, knowledgeable and friendly. The best thing about my experience is that I now feel more secure, which is a feeling you can't really describe, but goes to your bones. My house, which means everything to me, is safe when I'm in it, and when I'm out. I would recommend Security Masters to anyone who wants their property to be safe and secure, and who wants a 5 star customer service. Many thanks to Mark and David for doing an excellent job.read more

Lisette Wybourn
19:38 03 Apr 19
Mark was very knowledgeable, helpful and gave me a number of options. The word was done quickly and efficiently.

Eileen Edwards
11:02 15 Feb 19
I just had my door frame repair and weather strip replacement by Mark yesterday. Mark arrived promptly by the time he given with his high quality work to solve the damage frame. It now looks as sleek as it used to be like the damage never happened. I’m really happy with Mark’s work and will definitely use their device again in the future. Thank you Mark, I really appreciated everything.read more

Chih-Hao Chang
13:30 11 Apr 18
Mark showed up promptly at short notice and quickly dealt with my concerns. I was really happy with the service, have peace of mind and sincerely recommend this firm.read more

Henry Hau
00:09 27 Feb 18
After receiving a referral I called Security Masters Ltd, to change the locks on our doors. The customer service received over the telephone and in person when Mark arrived to review the job was of a high standard. Mark is very knowledgeable about his industry. I felt completely happy with his suggestions and hired him to complete the job. I would highly recommend Mark and his company, Security Masters Ltd.read more

Ronke Ige
23:13 15 Feb 18
Mark was very professional in both his advice and workmanship. Turned up on time for both consultations and for the installation. Very professional work, leaving no mess and actually tidying away mess left by previous workers. Highly recommended!!read more

Zenubian
12:12 09 Feb 18
I found Security Masters to be very helpful and efficient. Having installed my locks over 10 years ago they were still able to service the locks at a very reasonable cost and with a really quick turnaround. I would highly recommend their service to anyone. They are trustworthy, efficient and cost effective.read more

Lucy Brinson
17:18 07 Dec 17
Mark seemed very efficient, reasonably priced and honest. He was able to offer lock suggestions that a previous locksmith didn’t even mention. He carried out his work quickly and cleared up after himself. Would definitely recommend.read more

A Seth
03:54 04 Nov 17
Professional and friendly, whilst making sure that the work done was fit for purpose. Will use again.

Alam Nathoo
14:25 11 Oct 17
Mark from Security Masters attended my rental property to investigate a fault with the main front door. It was a pleasure dealing with Mark. He identified the problem quickly and gave me clear options as to how to proceed. My tenants are delighted with the work he has done and, after my experience with other locksmiths, I was relieved to receive an invoice which matched his quotation with no hidden extras. I would certainly recommend Security Masters. Work is completed to the highest standard. They are extremely professional, efficient and trustworthy.read more

Kalpesh Patel
16:19 11 Jul 17
I recently asked Mark from Security Masters to change the locks at a property that I rent out where the tenant had to be evicted. I was extremely impressed with the professionalism of the company and the quality of the new locks installed. I would have no hesitation in recommending mark and his team to anyone I know.read more

Graham Milton
16:29 21 Jun 17
Arrived on time and carried out a thorough job. Happy with the end product

Julian Garcia
13:30 14 Jun 17
Thanks so much for all the hard work you've done for us over the years. Always a great job, completed with thought and care. There is no end to your talents!read more

Lorraine Windsor
17:32 04 May 17
Mark from Security Masters visited our property to carry out a security audit and demonstrated to us exactly where our home was vulnerable to burglars. He gave us really sound advice and advised us which locks needed upgrading. We had the locks upgraded and the wooden front door reinforced to prevent the door being forced, all for a reasonable cost. We can highly recommend Mark and Security Masters for their friendly professionalism, knowledge and expertise.read more

This website uses cookies to improve your experience while you navigate through the website. Out of these, the cookies that are categorized as necessary are stored on your browser as they are essential for the working of basic functionalities of the website. We also use third-party cookies that help us analyze and understand how you use this website. These cookies will be stored in your browser only with your consent. You also have the option to opt-out of these cookies. But opting out of some of these cookies may affect your browsing experience.
Necessary Always Enabled
Necessary cookies are absolutely essential for the website to function properly. This category only includes cookies that ensures basic functionalities and security features of the website. These cookies do not store any personal information.
Non-necessary
Any cookies that may not be particularly necessary for the website to function and is used specifically to collect user personal data via analytics, ads, other embedded contents are termed as non-necessary cookies. It is mandatory to procure user consent prior to running these cookies on your website.
SAVE & ACCEPT